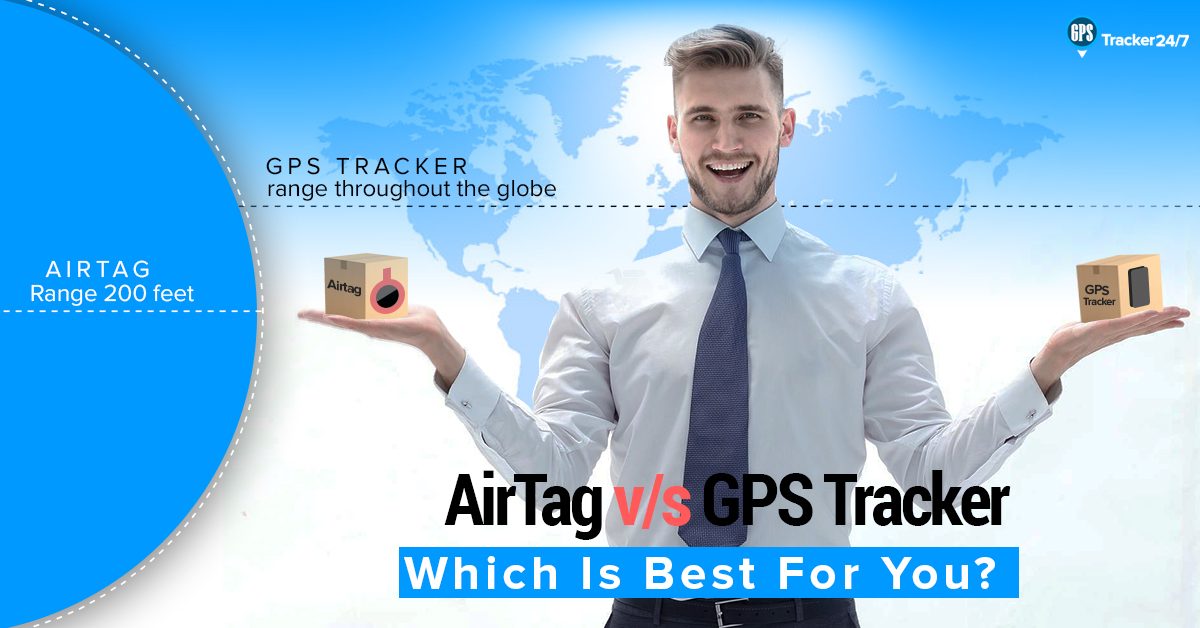 Are you looking for a reliable tool that can help you to track your valuable assets or loved ones? In this search, you will come across various options- AirTag, GPS tracking devices, Bluetooth trackers, etc.

So which one should you choose? Well, it depends upon your tracking needs and expectations. If you want a tracker to locate objects nearby, AirTag can be the one for you. But if you want to protect your valuable possessions from theft and enjoy real-time tracking, then look for no other than a GPS tracker.

In this article, we will compare the Airtag v/s GPS tracker.  to give you a broad idea of how it works and which would be the right option.

What Is GPS Tracking?

A network of 27 satellites orbit the planet and make up the Global Positioning System. Of these 27, 24 are active satellites, and three serve as backups if one of the other 24 should fail. These satellites broadcast signals to GPS receivers every 12 hours as they orbit the Earth.

Initially created in the 1960s for military purposes, GPS technology ended up with the general public in 1983, and developments and use cases have grown over the years.

Today, the use of GPS trackers like the Family1st portable tracker has become common. Everyone uses this technology to serve their various needs, for example, tracking their loved ones to protect their valuable possessions from theft.

The more people talk about GPS tracking, the more non-GPS-based companies enter the market daily. Early last year, Apple, the cellphone mogul debuted the stylish, compact AirTags to keep tabs on your key and purses, even cars and pets! Given the firm’s record of developing goods that spur broad adoption, like the first iPhone, AirTags may convince users to constantly track everything’s whereabouts to ensure that nothing is ever lost. But, can an AirTag effectively replace GPS trackers? Let’s examine the distinctions between AirTag and GPS trackers in more detail.

A guide on GPS devices, In this article you can find how they work and what are their applications.

What Is An AirTag?

AirTag tracker makes it easier to find lost objects. It is simple to attach to laptop bags, keychains, and other little items you could misplace. You can utilize the Find My network to track down any lost belongings. Around 1 billion gadgets that can detect Bluetooth signals from a lost AirTag are registered with the network. All iPhone, iPad, and iPod Touch models running iOS/iPad 14.5 or later are interoperable with AirTags. However, the Precision Tracking function, which uses ultra-wideband technology to deliver precise distance and direction, is only available on iPhone 11 and 12 models with a U1 chip.

How Do They Work

For instance, if your car is missing from the parking spot but holds a GPS Tracker, you can access the GPS device’s mobile app and view the precise location of your vehicle. But with the AirTag, the car is untraceable after it leaves a specific range.

However, you will be able to find objects within Bluetooth range. Suppose you can’t find your wallet or keys. For instance, you may launch the Find My app and see the initial position of your possessions with AirTags. The built-in speaker of AirTag will then emit a sound to help you find the products. Although the precise information is unclear, it has a maximum range of about 100 meters. It is also resistant to dust and water.

Safety Of The Tracker

GPS and AirTag trackers each have different practices and objectives. It is a safe option to determine which one you require in a given case. You can use AirTag to keep track of personal belongings like your laptop, keys, or wallet. A GPS tracker is appropriate to find assets that are valuable items or loved ones. They provide services beyond navigation and location tracking, giving you complete security.

To conclude, it comes down to your requirements, needs, and budget. We hope that this information assists you in reaching a decision. We suggest you take a look at Family1st Portable GPS trackers, we are sure you will find them perfect for your need.