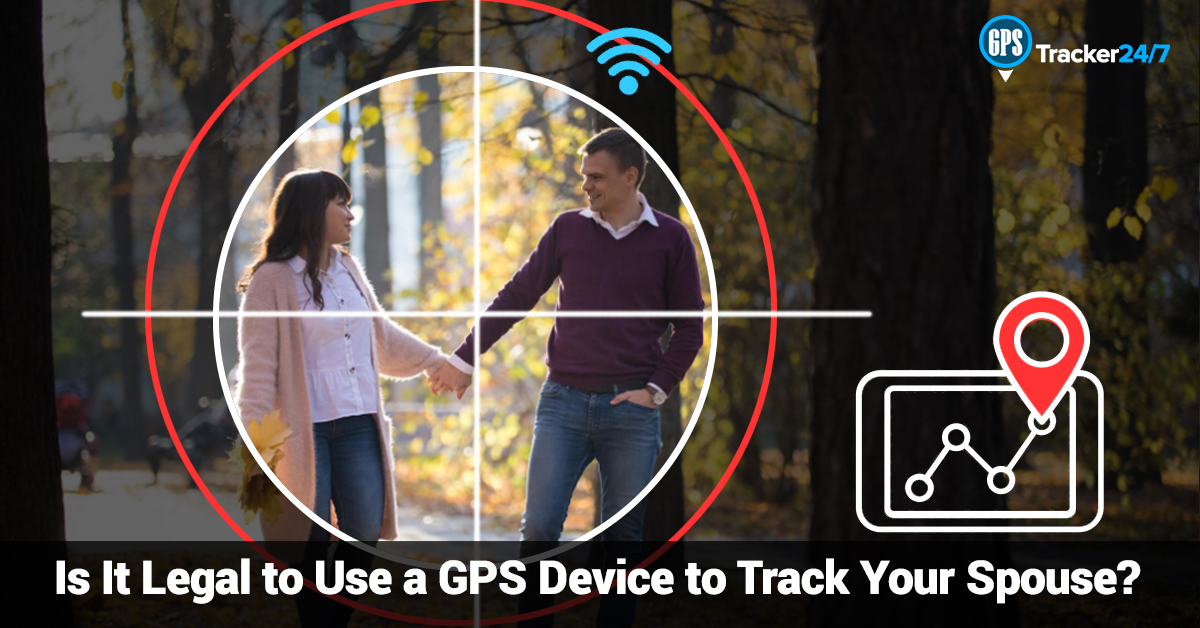 GPS has become an inseparable part of every individual’s life in today’s world. The utilities and benefits of GPS to industries like Health, Telecommunications, Education, Defence forces, and many others are invaluable. The civilian use of GPS integrated with smartphones has transformed lives in many ways. GPS devices are multi-purpose and used for tracking Cars, elders, children, trekking, sports activities, and pets. While GPS has numerous purposes, one of them is a yardstick to assess the strength of a relationship between two people

Is it legal to use a GPS device to track your spouse? This blog will give you all the information that you need to know

GPS plays a vital role in investigating the reasons for marital discord between couples. GPS devices have played an important role in legal divorce battles between spouses. The use of GPS devices to track marital conflict is a contentious issue, with many varied opinions.

Why do couples cheat?

The reasons are way too many to single out any one particular one. The most common reasons can be lack of commitment in the relationship, compatibility issues, extra-marital affairs, change in perceptions, or very high libido. With the advancement in technology and exposure to social media, there are abundant opportunities to seek solace outside a troubled relationship.

How to find out if your spouse is cheating?

There are many warning signs indicating that infidelity has crept into your relationship. The evident differences are paying more attention to appearance, constantly checking phone or social media, password protecting devices, unwarranted expenses, and bad sex life. There are many other reasons why your spouse could be cheating on you. Lack of alertness will cost your relationship dearly.

Depending on your demands, a wide variety of tracking devices are available.

GPS devices play a critical role in proving the guilt of a cheating spouse. Some points that you need to consider before choosing the correct GPS device.

This issue is very contentious and has been debated, for a long time. What once was considered the domain reserved for intelligence agencies has become easily accessible to the public in recent years. Private investigators who used age-old traditions like staking on a two-timing spouse to get a few pictures on their cameras now need only a GPS device to attach to the suspected car.

The case of United States v Jones in which the police attached a GPS device to suspected drug dealer Antoine Jones’ vehicle, was done without a warrant issued by the courts. The GPS device recorded and transmitted information for four weeks, which formed the basis of his arrest. The court had to decide whether using a GPS device without a warrant was a violation of the fourth amendment. The judge gave a verdict that the government’s decision to install a GPS device to monitor the vehicle constituted a search, and a valid warrant was required, for the same. As a result, the data gathered from the device was inadmissible in the court and overturned the conviction.

This judgment meant that the use of GPS technology falls under the fourth amendment protection against unreasonable searches without a warrant.

The states of Michigan, Rhode Island, Delaware, Texas, Tennessee, Illinois, and Wisconsin restrain installing a GPS tracking device on a motor vehicle without the consent of the vehicle’s owner. The states of Louisiana, California, Minnesota, North Carolina, Hawaii, New Hampshire, and Virginia more broadly restrain installing a GPS tracking device not just on vehicles but also when used to determine the movement or location of a person without consent.

Can you install and legally track your spouse with a GPS device?

The answer to this question is very grey. It is a legal issue and there are varied interpretations of the statute.

However, the court ruled that installing a GPS device in the shared vehicle was not an invasion of the husband’s privacy. The court observed that the GPS device only tracked his movements in public areas, where he did not expect privacy.

Texas law permits you to install a tracking device with the owner’s permission on their car. The spouse who placed the gadget might face stalking charges, and any evidence they gather will be unacceptable in a family court of law if the tracked spouse is the lone owner of the car or if only leased in their name.

What do you need to know before hiring a private investigator? Here we list the hints you must know.

Laws regarding GPS devices in some states of America

The location of a vehicle cannot be ascertained with tracking devices by someone who is not the owner or lessee of the vehicle. Law enforcement authorities are permitted the utilization of electronic power steering systems for legal purposes.

A person mounting an electronic tracking device on a vehicle without the owner’s consent is guilty of invading privacy under misdemeanors of class A and class G. The police have been given exemptions to use legal processes to identify a parent or legal guardian.

Florida law stipulates that attaching a tracking device without the owner’s consent to another person’s car is punishable by a fine. In Florida, there are a few exceptions to the rule.

Hampshire laws prohibit any government organization, from installing a GPS or other electronic tracking device without a court-issued order.

In this state, there are no regulations governing GPS or electronic surveillance.

When someone utilizes technological monitoring, such as GPS, to torment another person, it is referred to be stalking and is illegal.

Regarding the utilization of a tracking device for vehicle monitoring, there are no conclusive statutes or lower court decisions. However, you should use caution when entering a car that isn’t yours or adding GPS to a car whose registered owner isn’t you.

It is prohibited to install or conceal an electronic tracking device on a motor vehicle without the owner’s permission.

In Utah, using an electronic tracking device to record or monitor someone’s movement for a legitimate reason is allowed.

You are legally permitted to track a car without the driver’s permission if your company owns it. This is because it is acceptable to protect your personal or professional vehicle in cases of theft recovery.

Evidently, there is no uniformity in the states with laws regarding using a GPS device for tracking individuals. Each state has its guidelines and regulations for personal tracking.

Depending on the usage of the devices or subject to court interpretations, various general stalking, harassment, or invasion of privacy statutes may likely apply in states lacking legislation specifically governing mobile monitoring devices.

It is critical to consult with a lawyer that specializes in car surveillance to receive the most up-to-date information on GPS rules before you monitor a vehicle or piece of property because GPS monitoring laws are constantly susceptible to change. When you own the car or have a court-issued warrant, GPS systems are typically permissible to employ. It is always advisable to be compliant with the law governing your state, before taking any initiative of tracking your spouse with a GPS device.